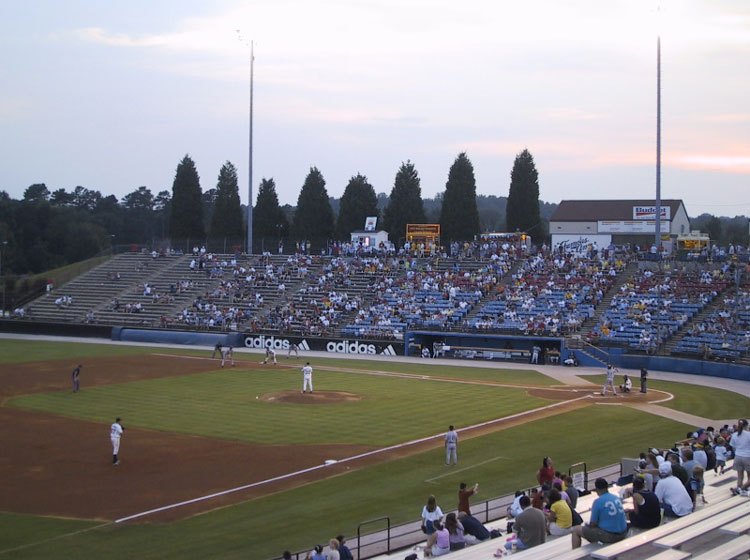 Spring 1992 saw me locate from Southwestern Virginia (yay Appy League!) back to my hometown of Asheville, NC. Our local team, the Tourists (Astros affiliate) sucked as did the Braves Macon franchise in the Sally League, so I turned my eyes further afield only to discover one of the all-time best minor league teams, the 1992 Greenville Braves, just 45 minutes away in Greenville, SC.

Old Municipal Stadium: You Could Do Worse

Greenville had hosted the Braves as an AA Southern League team since 1984 at the old Municipal Stadium (not the current Fenway-replica stadium). As a venue for baseball, the place was fairly average for the early 90’s — parking was a hassle, seats were mostly just aluminum benches on concrete tiers, vendors had both types of beer, Bud and Busch. The seats were fairly close to the action behind the plate where the box seats were, while angling slightly back towards the field down the lines. There wasn’t a lot of foul ground as a result. Still, boxes were usually $4 and came with in-seat service: you could do worse.

Manager Grady Little gets a bad rep because of his epic mismanagement of the 2003 ALCS that cost him his job in Boston but he was a great Minor League Manager, arguably the best in the last 40 years (Snit and Rocket Wheeler would be the main competition). While much of MiLB strategy is constrained by fiat from the front office, the managers tend to make a difference by making the experience enjoyable for the players while still being professional — Grady no doubt loved the umbrella thing for Donaldson last summer for example. Where this affected the play was on the bases — Little loved himself some hit and run. Officially you will find the team middle of the pack in stolen bases and at the top end of caught stealing for the season; what you won’t see is that they actually attempted steals at a far below average pace — those were all broken hit and runs. Guys seemed to love playing for him, though.

The team saw a remarkable 11 position players reach the majors including some good ones. The mainstays all year were outfielders “Terrible” Tony Tarasco and Mike Kelly, first baseman Mike Bell and young catcher and team MVP Javy Lopez. Tarasco and Kelly would later reach Atlanta and have underwhelming careers as backups-who-strike-out-too-much but for Greenville they were genuine-stars-who-strike-out-too-much, playing great D in the field while doing it all at the dish. Bell was a Mark Grace type who never did hit for power — tough to have a career doing that. Javy was on a catch every other game schedule sharing time with Eddie Perez.

The rest of the first half regulars were no slouches — Aubrey Waggoner the left fielder didn’t know what that leather thing on his hand was for but enjoyed a long MiLB career as a good hitter, and even he wasn’t the type of black hole of defensive suck you find on most minor’s teams. Other stalwarts included Mike Mordecai and Ed Giovanola. Overall, the defense was likely the best I have ever seen on a MiLB team and made them extraordinarily fun to watch.

The pitching side featured fewer actual prospects but had some highlights. Nate Minchy had his career year and later, after years of arm trouble, would eventually pitch in the bigs over in the other league. For Greenville he was a ground-ball inducing machine. The #2 starter was Dennis Burlingame, a righty who gave up tons of fly balls without any strikeouts and I spent the entire season wondering when the bubble would burst (the answer: 1993). The top reliever was a 1986 6th round draft pick named Andy Nezelek who would throw a remarkable 108 innings from the pen before losing the rest of his career to injuries, surprise surprise. While a rightie, Nezelek had Mitch Williams delivery and I can’t understand how any right handed hitter could stand in against him. The league didn’t keep HBP as an official stat but let’s just say I saw him get his share.

There was no pennant race in either half. They finished the first half at 49-23 (.688) a comfortable 11 games in front. Then they got better. Two new faces joined for the 2nd half: Melvin Nieves (who would be traded along with Teammate Donnie Elliott and someone named Vince Moore for the Crime Dog next season) and one Larry Wayne Jones.

The team sawed off the Charlotte Knights (White Sox) with a 3-0 sweep to start the postseason before facing the Chattanooga Lookouts (Reds) in the final. Greenville took the opener behind a complete game from Minchy, before Burlingame got an early start on 1993 while getting only 2 outs in game 2. After splitting a pair of rainouts — really, some outlets have them counted as finished games while others don’t list them at all — game 5 for the series was played before a full house in Greenville and saw the good guys prevail in a topsy-turvy affair.

Thanks for reading on the 1992 Greenville Braves. If you enjoy lookbacks at Braves Minor League Teams and Major League Teams, check out our Braves History category!