In 1982, we had One Brief Shining Moment. Got swept by the Cards in the NLCS. We then finished second to the Dodgers, twice, in 83 and 84. So Ted fired my personal hero Joe Torre, who went on to prove to be an ok manager elsewhere. Who needs Joe, when guys like Bobby Wine, Chuck Tanner, and Russ Nixon are available?

In 1986, Ted Turner found a new toy: movies. He bought the MGM studio and all its intellectual property. He then resold virtually all of it except the movies and starting running the movies on TBS. He was widely ridiculed at the time. He made a mint. Idiot savant. He also started some kind of 24 hour news thing. 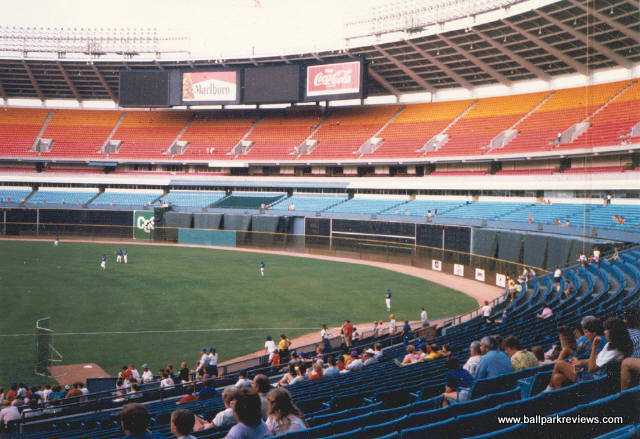 This was good and bad for the Braves. Good, because Ted was no longer interested in making personnel decisions for the Braves. Bad, because Ted was no longer interested in the Braves at all. Instead, in order to run “The Quiet Man,” starring John Wayne and Maureen O’Hara, at 8 pm on TBS, he ordered that the Braves home games start at 5 pm. As a result, there were roughly 1500 people in the stands for a home game. I know: I was one of them once upon a time. It’s like the old Army joke, about how bad the food is and such small portions, too.

In 1988, the Braves sold less than 850,000 tickets. You couldn’t give them away. I mean that literally. I showed up in Atlanta to work at a client’s headquarters. When I told them I was going to go to the Braves game that night, they actually laughed at me. Someone asked if anyone knew where the company’s tickets were, they were finally discovered at the bottom of somebody’s drawer, buried under some files, and voila, there I was, sitting two rows behind the dugout in a stadium that was so empty you could hear the players’ conversations.

I really didn’t have the knowledge at the time, but I have to suppose that Ted’s various financial wheelings and dealings severely hampered his willingness or ability to shell out for baseball players for his former plaything. (His then current plaything turned out to be Jane Fonda.) But the endless parade of rent-a-former-MVPs stopped dramatically. Whether this was Ted’s lack of money or caring, I don’t know. Probably both.

So from 1985 to 1990, the Atlanta Braves put on a display of suckitude nearly unrivaled in the modern baseball era, finishing last in their division four out of six years (and second to last the other two). In 1988, they lost 106 games. 1-oh-6. We were saved only by the Orioles, who lost 107.

In 1989, Zane Smith, then probably one of the three or four best lefties in the league, went 1-12 out of the gate. He had behind him Andres Thomas (29 errors), Jeff Blauser (21), Ron Gant (17), and Jeff Treadway (12) and a team batting a collective .234 with an OPS of .647; the Braves traded him at the break because they felt he might hang himself in the clubhouse.

We had a power-hitting third baseman who got so fat that the team put weigh-in incentives in this contract. He didn’t meet them, and had to be moved to first base, He was succeeded by a first baseman with no power whose glove was so bad his teammates called him “The Claw.” We had the only Dominican shortstop ever who couldn’t actually field.

We traded a great closer in Steve Bedrosian for the Phillies’ all-star catcher, Ozzie Virgil. Ozzie, it turned out, sucked. We traded for Ken Oberkfell. He sucked. We signed an over-the-hill Graig Nettles. He sucked. We signed FA Nick Esasky to a huge contract, and he turned out to have a disease that was never successfully diagnosed (Lyme disease was a leading contender) but which rendered him incapable of playing baseball or even running.

The Braves became sort of the elephant graveyard of formerly great players. Because they were once good, we wanted them, and because they were no longer good, nobody else did. A lot of All-Star caliber players ended their careers in the Atlanta graveyard. Ted Simmons, Chris Chambliss, Ken Griffey Sr., Lonnie Smith, Darrell Evans. They didn’t all suck. Simmons, Griffey and Smith actually each had at least one productive year before going toes up. (Smith, a greyhound outfielder in his youth, arrived in Atlanta 35 pounds overweight in 88, but led the league in OBP in 1989.) But the occasional success story didn’t help overcome the strong stench of desperation wafting from the constant acquisition of guys who were in the winter of their careers.

What did we have? Dale Murphy. And then, when he could no longer play, we sold him to the Phillies for a AAA player and a washed up pitcher. What we also had were some young kids, toward the end of this debacle. Glavine, Smoltz, Gant, Blauser, Lemke, Justice, Avery. But for all we knew, they were no different from the dreck that had been served up to us for the last six years. A team full of those names went 65-97 in 1990 and finished, yep, dead last in the NL.

With an absentee owner, Braves fans were playing Macaulay Culkin in Home Alone. It was pretty lonely. Band-aids were put on sucking chest wounds. I would say we were asked to soldier on, but nobody even really cared to ask us.

Next: History rhymes. Or does it?

121 thoughts on “The Wandering Years. Chapter Two. (by bledsoe)”