This is a post I never wanted to write, but I knew that I would have to. Mac Thomason passed away on Saturday, September 1, following a three-and-a-half-year battle with testicular cancer.

Mac was an unusual Alabaman. He was a librarian at Stillman College, a historically black college in Tuscaloosa, Alabama. (He rarely liked to say where he worked, because he didn’t want his online blogging to be a distraction or cause any embarrassment to his employers.) He lived in Northport, across the Black Warrior River from the main part of Tuscaloosa, which protected him from the worst of the 2011 tornado.

He was a Bama grad and a Braves fan in a family of Mets fans and lawyers, and a political blogger who identified as a “war liberal” but forbade anyone from talking about religion or politics on Braves Journal. Politics was in bounds at his other blog, War Liberal, which was later renamed to “Thomason Tracts,” which took its name from a collection of 17th century documents from the English civil war. Mac was a librarian and a nerd, but I repeat myself.

Mac founded Braves Journal in 1998 because Compuserve offered free web hosting. The original address was http://ourworld.compuserve.com/homepages/MacThomason/, and this is what it looked like. He had parody sports articles — sort of like Onion Sports, half a decade before the Onion launched its sports sections — in a section called “Baseball Free Press.” He did fake chats, years before The Dugout. On the very first page he put up, The “Rafael Belliard Home (Run) Page,” he wrote, “At his current rate of one home run every ten years, Raffy is on pace to break fellow Brave Hank Aaron’s record for career home runs in the year 9537.”

Later, he started The Road from Bristol, an NCAA-style bracket to try to find the worst ESPN personality of all, and it was possibly the highest-profile thing he ever did; it got written up by everyone from the Associated Press to Deadspin. (The AP got his age wrong, of course; he was 34, not 24. And when John Schuerholz sent Mac a get-well card, following agitation by me and some other members of the site, he sent it to “Mark Thomason.”)

Going back to the beginning, Alex R. was a contributor to Braves Journal. As Alex wrote in a note on Facebook, he first met Mac in 1993, when he was a freshman at Bama; Alex transferred to UGA the next year, but they stayed in close touch online and by phone, and the blog was part of that. Alex was a constant presence on the blog back before he became a father — before his son Jake was born in 2007, Alex considered naming him “Willie Harris R.,” after the original Willie Harris made this catch to rob Carlos Delgado of a game-tying home run. Alex R. is the reason that I’ve always been AAR, or “Another Alex R.”; he’s also one of the reasons that the blog is what it is: funny, angry, passionate.

Alex may have known Mac better than anyone outside his own family. He described Mac as he was back at Bama:

His sarcastic demeanor was a defense mechanism for him and though he never said it, I know he was lonely and frankly, being around people (most of whom) were not as bright or quick witted as he was, was difficult for him.

Mac approached cancer, the way he approached everything, with humor as a defense mechanism. So when he wrote about the recurrence of his cancer in early 2010, he explained it this way:

My oncologist prescribed a new treatment this year; let’s call it “Yunel Escobar” because it is annoying and showy but effective. And Yunel led off the treatment with a triple. Yay! It would be easy enough to get the run in/cure the cancer.

Unfortunately, it turned out that the treatment acted just like the Braves’ offense in the first half of last season, where they couldn’t score nearly as much as they should have. And it turned out that the men on deck were Francoeur and Norton. So, now there are two outs, and Yunel is still standing on third base, and who knows what he’s going to do next.

Unlike the 2009 Braves, my oncologist has a really effective pinch-hitter he can use. However, he’s so annoying that he makes Yunel look like Stan Musial, and has to be called in from outside. But he’s so good that he shouldn’t have any problem driving in Yunel. The treatment should be late this month, if nothing gets in the way.

Mac was an internet pioneer, in many ways, as one of the first regular sports bloggers; for all I know, he may have been the longest-tenured daily baseball blogger, much as the Braves (as he liked to point out) are the oldest continually-operating franchise in Major League Baseball. He wasn’t a household name, but people in the industry knew who he was, as he found out when he announced his cancer diagnosis and numerous writers wrote well-wishes for him. And he had hundreds of people here who loved and cared for him, as he learned when we asked for donations for an iPod and he received over $2800 from more than 130 donors.

Not many people get to hear their own eulogy before they die and truly learn how much they meant to the people whose lives they touched. I take comfort in the fact that Mac had that knowledge in the hospital room, even as he was dying.

Back in October, his doctors told him that they were unable to operate because his cancer had been spreading, and that, unless they could find another treatment, he had months rather than years to live. And so he made this pledge:

More than anything — well, other than getting to tell bill collectors to take it up with my estate — I want to make sure that this place stays open, because it’s my legacy and I’m damned proud of it. There will be some changes, but we go on. I’ll be with you in some form, I promise.

This site will always be The House that Mac built, and we will keep it open and running as always. The Braves will continue to disappoint us — right on schedule, John Sickels named Julio Teheran possibly the most disappointing non-injured prospect of the year — and so we have a job to do.

This is an awful day. But it is not the end. 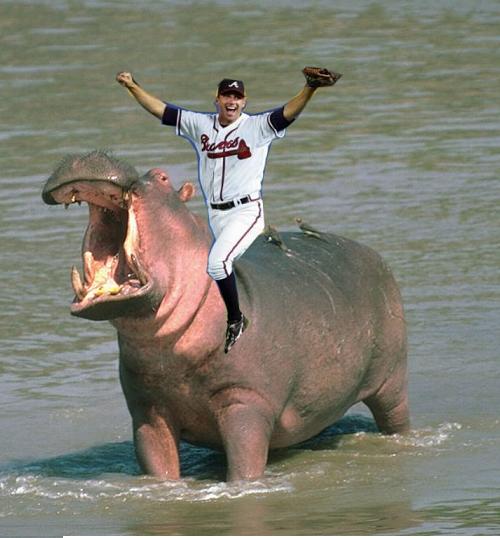